PIRUZ SABOURY
I study pro-social markets and institutions such as Philanthropy, Charitable Giving,
Social Entrepreneurship, and Microfinance, and their impact on
​Poverty Alleviation and Economic Development.

While existing theory predicts that matching leadership gifts raise more voluntary contributions for public goods than seed money, recent field experiments find otherwise. We reconcile the two by studying a model of leadership giving with incomplete information about the quality of the public good provided by a charity. Both the fundraising scheme employed by the charity and the contribution decision by the lead donor may signal the charity’s quality to subsequent donors. The charity solicits optimally for a matching gift if the lead donor is informed about the quality of the public good. Intuitively, an informed lead donor conveys quality information to downstream donors through the size of her contribution. As a result, the charity has no signaling concerns and opts for matching because of its ability to mitigate free-riding. The preference for matching, however, reduces when the lead donor’s information is limited. Then, the lead donor’s contribution is less informative and the high quality charity uses seed money as a costly signal of quality. As a result, seed money is associated with higher expected quality and higher expected contributions compared to matching. 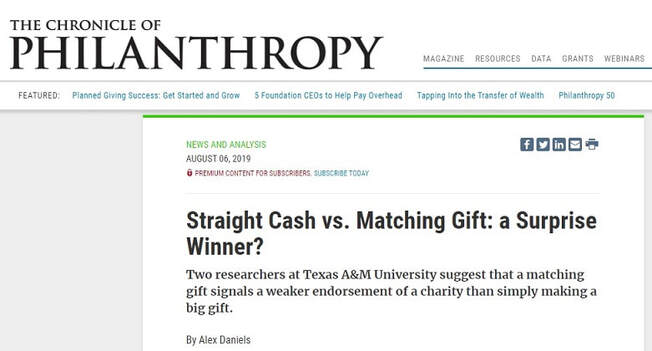 In the media
This research work has been covered in The Chronicle of Philanthropy.
Existing experimental studies find weak support for the theoretical prediction that matching leadership giving alleviates free-riding and raises more voluntary contributions for public goods relative to seed money. However, while these experimental studies use exogenous variations of the leadership gift, theoretical models allow for this choice to be made by a strategic lead donor. In order to provide a more direct test of the theoretical prediction, we conduct a laboratory experiment with three sequential strategic players: a fundraiser, a lead donor, and a follower donor. The fundraiser chooses between a matching and a seed money fundraising scheme, followed by sequential contribution decisions by the two donors. We find that matching increases overall average contributions by almost 10% relative to seed money. Moreover, under matching, there is a decrease in the lead donor's contribution, but the follower donor contributes significantly more. Interestingly, fundraisers choose the matching scheme only a third of the time. However, the probability of choosing the matching scheme gradually increases throughout the game for females subjects. This is not the case for males.
We conduct a natural field experiment where we exogenously manipulate a restaurant’s menu to include a third party charitable donation to a hunger-related charity when customers select a smaller food portion. We find that generosity is an effective instrument for motivating individuals to reduce their food portion size selection, particularly among Overweight/Obese individuals. Overweight/obese individuals are 35 percentage points more likely to choose the smaller portion when it carries a donation. When the donation is combined with a health information nudge, the proportion of smaller portion choices among overweight/obese individuals increases by 48.2 percentage points compared to the baseline.

The commercialization trend in microfinance, once an entirely non-profit industry, has triggered much debate about its direction. While some argue that the transition to a for-profit sector is a necessary step towards efficiency, others believe that profit-seeking will result in mission drift, i.e., a diversion away from its original mission of helping the poor. I offer a novel theoretical explanation for this polarization. The model presented has two distinguishing features. First, the costs of lending are increasing in poverty. Second, social investors have one of two distinct welfare goals: helping the poorest of the poor (Rawlsian) or maximizing consumer surplus (utilitarian). When costs are unobservable, commercialization signals low costs, which appeals to utilitarian investors but dissuades support by Rawlsian investors due to the wealthier borrowers associated with low costs. Therefore, so long as the Rawlsian philosophy is dominant, all MFIs (microfinance institutions) operate as non-profits. However, once utilitarian preferences take over, MFIs with wealthier clientele (the marginal poor) offer high repayment to investors to stand apart from MFIs that operate in highly impoverished communities and incur high costs. They cannot afford this signal and remain non-profit. In conclusion, utilitarian investors drive the commercialization trend, which divides the microfinance mission. For-profits attract more resources into the industry and serve the marginal poor while non-profits carry on the more costly task of serving the poorest of the poor.
We analyze relationship lending and repeated borrowing when borrower cash flows are not verifiable and when the costs of intermediation vary over time. Because lenders provide repayment incentives to borrowers through the continuation value of the lending relationship, borrowers will condition loan repayment on the likelihood of receiving loans in the future. In other words, the the lender’s expected future financing decisions affect the value of the underlying loans. Thus, since future lending decisions are dependent on future lending costs, beliefs about the intermediary’s future liquidity become an important component of the borrower’s repayment decision. Consequently, the possibility of high lending costs in the future weakens repayment incentives, which in turn, leads to an inefficient under-provision of credit by the lender. Moreover, as the likelihood of a prolonged period of high liquidity cost increases, the adverse effect of future liquidity constraints on today’s lending decisions exacerbates. We discuss the application of our model to the case of microfinance.

The nonprofit sector features significant quality variation, with around a third of rated nonprofits failing to meet minimum industry standards. This coupled with donors' limited knowledge of existing nonprofits, poses a challenge for well-run nonprofits to distinguish themselves from their poorly performing counterparts. We experimentally investigate the role of seed money and matching gifts in informing donors. We have theoretically shown that when the lead donor's information is limited, a high quality fundraiser uses seed money as a costly signaling device to convince donors of her high quality. Hence, seed money leads to more fundraising than a matching gift. We aim to investigate this prediction in a laboratory experiment with three sequential strategic players: a fundraiser, a lead donor, and a follower donor. The payoff of the public good is uncertain and only observable to the fundraiser who chooses between a matching and a seed money fundraising scheme. That is followed by sequential contribution decisions by the two donors. We vary the information available to the lead donor to examine the relative performance of the two schemes and the fundraiser's choice of scheme in different informational environments. The findings reveal the signaling value of each scheme.

External Research Grant
This study is supported by a $10,000 research grant from the International Foundation for Research in Experimental Economics (IFREE).​
We compare two different impact estimation methods: RCT (randomized control trial) and DID (difference in differences). We introduce heterogeneity of impact, which is not random but correlated with treatment status. The different methods systematically differ in what they estimate. RCT tends to estimate a smaller impact than DID. We argue that RCTs estimate the local average treatment effect on individuals with intermediate to high impact. However, DID methods tend to find a higher estimate of the impact by estimating the local average treatment effect on individuals with the highest impact. For our empirical interpretation, we turn to recent impact evaluations on microfinance. These studies have not found much average causal impact, but some of the studies have found heterogeneous impacts across different types of borrowers.
Online crowdfunding platforms have become an increasingly appealing tool for small scale charitable fundraising. However, the application of crowd-funding to philanthropy has not yet been studied extensively. In this paper, we focus on the sequential nature of giving on crowdfunding platforms. On the one hand, this feature exacerbates late donors’ incentives to free-ride on early donors’ contributions. On the other hand, sequential giving provides an opportunity for leadership-giving by early donors. That latter means that lead donors can signal their information about the quality of the public good to downstream donors through the size of their donations. Thus, downstream donors are expected to respond positively to early donations. To understand the impact of leadership and donor behavior in the context of crowdfunding, we use data from a prominent crowdfunding platform to estimate early donation’s effect on later donations’ frequency and size to verify which one is the dominant effect: free-riding or signaling.​
Existing economic theory recognizes two main motives for giving: the “warm glow” from the act of giving and the “altruistic” utility from providing a public good. Previous experiments have established that while altruistic motives always exist, they are in many cases accompanied by varying levels of warm glow. In this study, we aim to investigate the effect of emotional stimulation (specifically video ads used by charities) on each of the two main giving motives. Does stimulating one’s emotions induce a higher preference for the provision of a public good, or it strengthens the warm glow feeling from the donation? We are also interested in understanding how the change in motives (if any) translates into a change in giving behavior. We have designed a lab experiment that exploits the difference between pure and impure altruists’ extent of crowd-out of third-party public good provision to understand the type of giving motive that emotional stimulations appeal to.